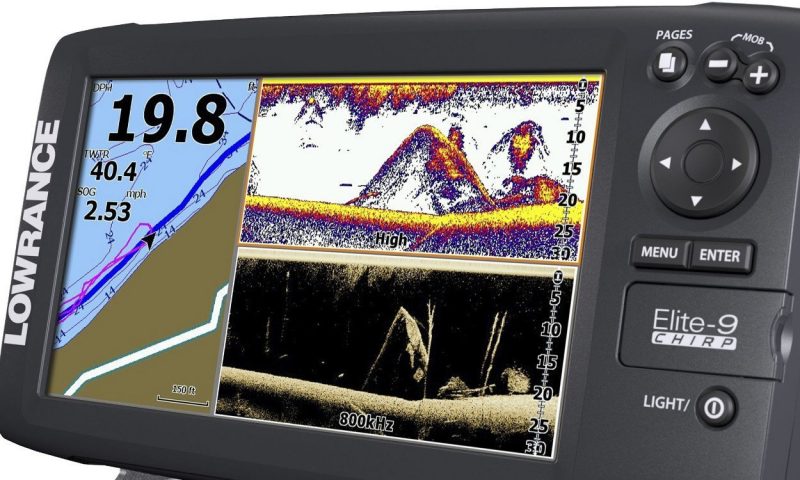 CHIRP sonar is all the rage these days in the fishing world. The frequency sweeping sonar has embedded itself in the mainstream now, thanks in large part to Lowrance and their most recent versions of the Elite series of fish finders.

The combination of traditional sonar with DownScan imaging and now CHIRP sonar makes these fish finders extremely attractive to many anglers. In our Lowrance Elite CHIRP review, you’ll see why these fish finders are some of the most versatile we’ve ever researched. When you add in their extremely competitive price and it’s no wonder the Elite series have been so popular with anglers. 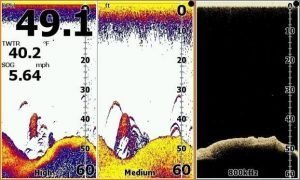 The Elite CHIRP Sonar system send pulses of sound over a band of frequencies for a longer time, compared to the short pulses of a single frequency on traditional sonar. The advantage it supposed to be less noise and clutter, better target separation, and clearer readings overall.

There is a High (200kHz), Medium (83kJz), and Low (50kHz) CHIRP setting on the Elite series, but you only get two of these depending on the transducer. For the vast majority of freshwater anglers, you’ll want to get the fish finders with the 83/200kHz (Medium/High) CHIRP transducer. The Low/High models would be best suited to deep water fishing such as in saltwater, or perhaps the Great Lakes.

High CHIRP  is best for freshwater, has the highest detail for tracking lures on the screen, best for seeing gamefish near baitfish or when fish are hugging bottom.  Medium CHIRP  has wider coverage area for faster searching, larger fish arches, but has less detail overall compared to High CHIRP.  Low CHIRP  is best for maximum depth performance, and marking fish at all depths of the water column.

Use the built in DownScan imaging to compare with the broadband or CHIRP pictures. Doing this helps distinguish weeds from brush, fish from wood, and generally helps you learn just what the heck you are seeing below your boat.

The 3D like picture can help tell you how fish are relating to a piece of structure. Are they in the tops of trees, or off to one side? Are there 2 or 3 fish, or a whole wad of them? DownScan can help you figure that puzzle out.

DownScan Overlay: It is true that on all brands, down imaging sonar can be tough to see actual fish on the screen. The DownScan Overaly feature attempts to blend the best of both 2D sonar and DownScan imagery into one kick ass picture. The idea is to make strong returns such as fish ‘pop’ from the brush and structure where they are normally hard to see.

Other Key Features and Specs of the Lowrance Elite CHIRP Series

Broadband Sounder: This is your standard dual beam sonar that everyone is accustomed to, and is built into the HDI Skimmer transducer.

Trackback Sonar History: Trackback allows you to scroll back in time on your sonar history to mark fish and objects on the bottom, making it unnecessary to turn around to idle over the spot again. This can be helpful, especially on smaller screen fish finders.

Upgradable Charts (Optional): The Elite CHIRP fish finders are all equipped with one microSD card slot that is compatible with most of the leading mapping product such as Navionics Gold, HotMaps, Nautic Insight, Fishing Hotspots, and Jeppessen C-Map Max-N.

Create Personal Maps: Let’s say you fish small unmapped lakes or ponds. With Insight Genesis you can take your sonar recordings from the Elite CHIRP unit and upload for free onto the Insight Genesis platform to make a custom map. The downside is you need to subscribe in order to download onto a microSD card.

NMEA 2000 Networking (Elite-9 Only): With the Elite-9 CHIRP, you can link up to your other NMEA 2000 capable units to share waypoints, and much more. 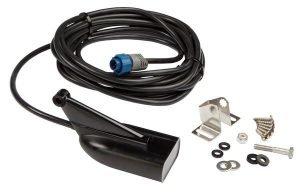 Here is the HDI Skimmer transducer included in each Elite CHIRP fish finder. I don’t know about you, but the mounting looks pretty weak to hanging off the end of a fishing boat that will be idling around all kinds of junk in its service life.

That long arm and tiny bolt are begging to be broken off on the first stump you hit. I’d recommend getting a Transducer Shield and Saver mount to protect your new high performance transducer.

Here are some screen shots from Elite CHIRP fish finders. Look at how using CHIRP side by side with DownScan can be super helpful reading structure when you’re on the water. 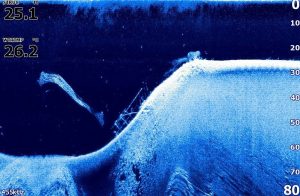 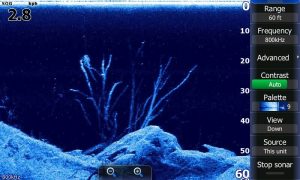 The Elite CHIRPs are a highly popular fish finder, and with good reason. With sizes ranging from 4 to 9 inches, there is an option for anyone from kayak anglers, tins, up to bass boats and more. Lowrance has pushed the benefits of CHIRP sonar down to mainstream depth finders, and now regular anglers can enjoy and get the most of this clear scanning sonar technology.

There is a ton of choice out there for down imaging and CHIRP fish finders from Garmin, Humminbird, and Raymarine.  Read our reviews of those fish finder series below, or use our Fish Finder Comparison Tool to compare the fish finders you are interested in side by side.

Return to all Fish Finder Reviews