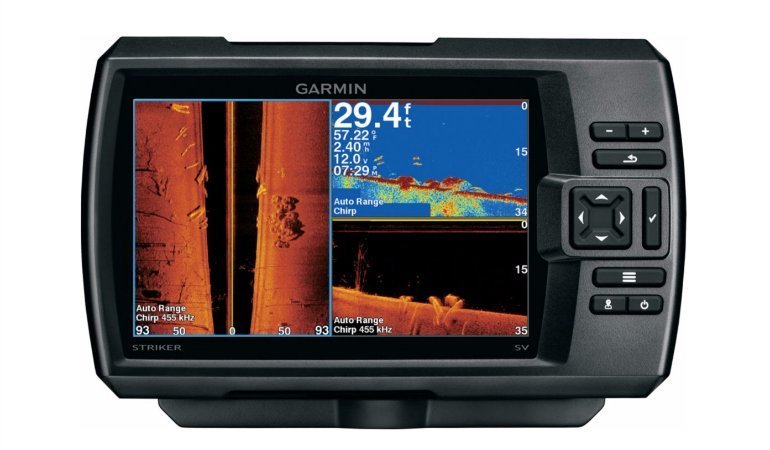 Garmin has made waves with their new budget priced, down and side viewing STRIKER series fish finders. The units are priced aggressively to compete with Humminbird’s Helix and Lowrance’s Hook, but lack some of the nice features of their higher end echoMAP finders, which we’ll cover later in the review.

While the STRIKER units look great in price, they won’t be the best option for everybody. In our Garmin STRIKER review, we’ll explain to you how they could be a great choice for first time or budget minded fish finder buyers who want the benefits of the awesome DownVü and SideVü sonar without having to spend a fortune.

If you have been researching your next purchase you may have noticed some models are called “dv” while others are “cv“. Digging through forums you will see speciulation that the name change is due to a lawsuit between Navico (Lowrance) and Garmin, in which Garmin decided to change the name from DownVu to ClearVu, as well as change from a dedicated imaging crystal to blended down imaging using the side looking crystals. Speculation aside, the important thing to know is that they perform the same function as far as fishing is concerned. ClearVu is simply the new name for Garmin’s down looking imaging sonar. 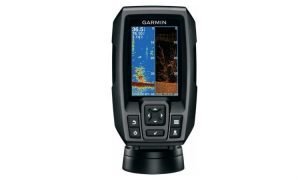 The STRIKER 4cv falls into a sweet spot of price and performance. While comparable units like Humminbird PirhanhaMAX also have down imaging sonar, they do not have the CHIRP or GPS capability that STRIKER 4cv does.

The vertically oriented 3.5 inch screen is compact making it a good choice for a kayak, canoe, jon boat, or even for ice fishing (with the built in flasher mode). The screen is bright and sharp enough to use split screen without making your picture too small.

The GPS chartplotter is very basic but useful, allowing you to create way points at any location you want, like when you catch fish, find a productive boat dock, or a key piece of underwater habitat.

The 4cv comes packed with the GT20-TM transducer, with transom and trolling motor mounts, and a tilting and swiveling mounting base. Pretty standard stuff, but it’s everything you might need to get started to finding and catching some fish. 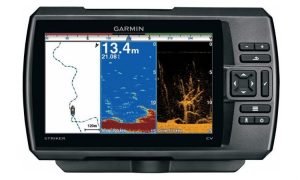 Stepping up the STRIKER 7cv and 5cv, you gain some important screen real estate and pixels. Both 5 and 7 inch models sport 800 pixels by width, and 480 pixels by height. Thanks to higher pixel density, the 5cv will look a little crisper than the 7cv, but you can see more, and more easily with the additional 2″ of diagonal screen.

Garmin’s DownVü sonar operates at 3 frequencies on these units, 260kHz, 455kHz, and 800kHz, giving you lots of options to optimize your image for both depth and side range. With practice, you can achieve picture like images of fish and structure with the DownVü scanning sonar. If you have trouble understanding what it’s showing you, remember that you are looking at wide and narrow sonar beams, not vertically oriented cones.

The 5cv and 7cv also come packaged with the GT20-TM transducer, which you can optionally upgrade to the GT22-TM or GT23-TM transducer for high performance CHIRP. The good news if you like to use DownVü on the trolling motor, is that it comes with a trolling motor mount in addition to the transom bracket. 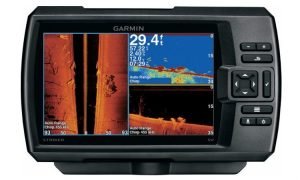 The 7sv is the top model in the STRIKER series. I features side and down imaging sonar on a bright 800×480 pixel screen, just like the comparable Helix 7 SI GPS, only cheaper.

The only downside, like all the others in the series, is the missing microSD slot for mapping. But does that really matter that much when you have 7 inches of kick ass SideVü? Only you can answer that.

We also have to talk about the STIRKER 7sv’s CHIRP sonar options. With the included transducer you can view the mid and high CHIRP frequency ranges in the 2D mode, and 455 or 800 kHz CHIRP in the SideVü and DownVü modes. This is awesome for getting target separation which means you’ll see more detail and fish with more clarity.

The STRIKER 7sv comes packed with the GT52HW-TM transducer, which is the same transducer you get on the bigger echoMAP SideVü units. You can mount it on the transom or on your trolling motor with the included mounting brackets.

If you already have a small mapping GPS unit at your console, the 7sv would make a great dedicated SideVü screen for finding those fish holding structures.

Should you Get a Garmin STRIKER?

Pros +  The main benefit of the Garmin STRIKER series is the imaging sonar capabilities you get for the price. The Striker 7cv and Striker 7sv are currently the lowest priced down and side sonar imaging units available in the 7 inch screen size.  The build quality is excellent as you would expect from Garmin, and screen is bright with the same great screen resolution as competitor fish finders.

Cons –  The biggest drawback to the STRIKER fish finders, is the lack of maps and no microSD card slot. There is no way to add contour lake maps to these units, and is most likely the reason why the price on the units appears so attractive. So if you have your heart set on a unit with mapping you might want to look at the Garmin echoMAP CHIRP, or Humminbird Helix 7 fish finders.

The Bottom Line:  If you are on a tight budget and really want DownVü or SideVü, and can do without mapping, then the STRIKER’s are going to be very attractive. You could always get a STRIKER unit exclusivley for the imaging sonar, and then buy a cheap unit with GPS and mapping, sort of like what the pro bass fishermen are doing these days, but on a smaller scale.